Over the past several weeks I fear I have been guilty of acting like a bit of a marathon party pooper.  I was tired of the weather, tired of the training and just plain tired.  Then, just like that, spring finally sprung in Boston and my spirits began lift.  Last weekend I got to spend a lot of time in the city enjoying some pre-race celebrations and tributes and it really changed my attitude about next week’s race.   Here are some of the highlights of what I experienced.

On Saturday morning the Boston community was invited to participate in a special Sports Illustrated photo shoot as a tribute to the one year anniversary of the 2013 marathon bombings.  Last year, the April 22 magazine cover looked like this:

In honor of this haunting anniversary, SI wanted to use the space on Boylston Street that was filled with violence and terror a year ago and pack it with the spirit of the city. Thousands of people including first responders, victims of last year’s attack, Boston’s new mayor, Marty Walsh, and of course, tons of runners showed up at the finish line at 7:00 am Saturday morning to participate in this special opportunity.  My friends and I arrived just around 7 and were not a bit surprised to see the huge crowd.  No one really knew what was going on or when the photos would actually be taken so we stood in the street for an hour or so randomly posing and waving for cameras positioned above the finish line – a wave even started from the finish line and some Boston and Red Sox cheering broke out hear and there.  Then, someone finally emerged with a bull horn with some directions.  They would be taking a series of photos and apparently if we could see him – he could see us.  After another 30 minutes of cheering they thanked us and the crowd broke up.

Here is the cover of the April 16 issue (we are somewhere near where it says Ortiz, I swear) – 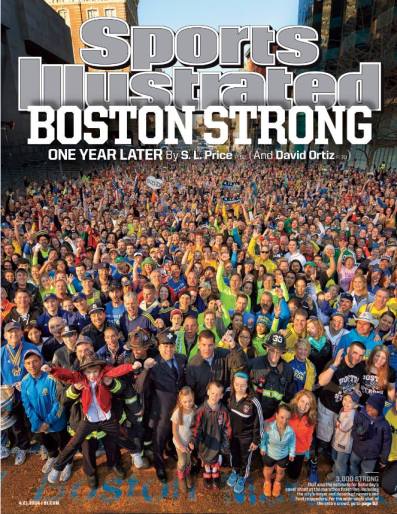 Like many of the other runners I incorporated the trip to the finish line into my run for the weekend – a short 8.  I ran 2 miles to Boylston Street, took a 90 minute break for the photo shoot and then ran out another 2 miles before turning around and heading back to the North End.  The energy in the city was infectious!  I used this run as a dress rehearsal and wore the shorts and team singlet I’ll be wearing on race day and many others did the same so the charity groups were able to recognize each other.  I felt great and it was just the strong run I needed to end my training.

It was a gorgeous day in the city so later on I went back to Back Bay to enjoy it some more.  There were a few race weekend items I wanted to pick up and browse all the marathon gear at City Sports and Marathon Sports.  I also wanted to visit an exhibition at the Boston Public Library called Dear Boston: Messages from the Marathon Memorial.  After the bombings last year a makeshift memorial formed in Copley Square not far from the finish line where visitors brought flowers and gifts of tribute in honor of those who were killed, injured and a city in pain.  A couple of weeks after the race I took my training run down Boylston Street to visit the scene and the memorial.  It was so moving to read the messages that people left especially notes written by children to offer comfort.  Below are a few of the photos I took but you can see more on this page: Dear Boston Photos

It was incredibly moving and took me back to some of the emotions I felt the week of the marathon last year.  I was sad but determined to run and not let violence change how I felt about the Boston Marathon.

I feel incredibly blessed to be in Boston experiencing all of this before the race.  One more special moment for me this weekend was receiving my hand-knit scarf from Old South Church.  I had been following this project for a couple of months and had hoped I would be lucky enough to receive a scarf.  I figured I would be spending plenty of time in Back Bay near the church and have plans to attend Easter Service/ The Blessing of the Athletes where they will be distributing some of them but I had some concerns that they may run out by then.  While standing on Boylston Street Saturday morning a man asked me if I was running and when I replied yes he offered me the most beautiful blue and yellow scarf hand knit by a woman named Barbara from Wareham, MA.  It is such a beautiful project that invited so many people from the Boston community and beyond (there are scarves being sent from all over the world now).  I feel honored to be a part of it.

Finally, I feel like the burnout and training slump I had been in was cured.  Sure the nicer weather has played a part but the remedy I really needed was to be reminded why this race, this year was so important for me to begin with.  On Tuesday, April 15, Boston held a tribute ceremony on the one year anniversary of the attack.  Our new mayor, Marty Walsh, was quoted “Next week, thousands of runners and millions of friends will be here. This Boston Marathon will be a living celebration of our resilience.” I am so proud to be part of that celebration and the reclaiming of the the joy and pride that comes with this race from start to finish.

Thank you, Boston, for helping me get back there.  I’ll do you proud on Marathon Monday.

BTW – the latest weather forecast for race day looks pretty good according to the guys at WHDH Ch. 7:
Patriot’s Day: A mix of sun & clouds. Looks great for the Marathon–temps near 45 in Hopkinton around 10am and 58 by midday-early afternoon for the runners/volunteers as well as spectators.

I’m a wife, mom to a toddler and 40+ woman enjoying a new phase of life.  Here on the blog you will find links to recently published articles, reviews of my latest reads and fun posts about life in general.

#BunkerHillorBust Block Party! We love this neighborhood! It was such fun to see our friends and neighbors faces again.
Shreddin’ @microkickboard #micromini #toddlerlife 🛴🌞
Only 6 more weeks (tops) until we finally meet our little girl. 💕
I’m so proud of my most recent published article currently featured on @pregnancyafterlosssupport. (Link in profile)